If you want to make sure your start-up fosters innovation, office design may have a larger impact than you might think. Unfortunately most North American offices and office parks have focused on cost-effective design, rather than aesthetics and function – with generic gray cubicles, and the same drab carpet, wall color, and blinds. Upgrades like adjustable desks and exercise balls can help, but innovative design entails more than ergonomic furniture. It’s about creating an environment that allows better communication, and where people feel appreciated and inspired.

After reading Steven Johnson’s Where Good Ideas Come From, I’ve been thinking about the relationship between office design and innovation – in particular about how workplace environments can either stifle or encourage the flow of information, and consequently employee innovation.

The beauty of an adaptable workspace

MIT’s Building 20 (which has since been demolished in 1998) is the perfect example of how an adaptable space can promote innovation. Initially built as a temporary research space during World War 2, Building 20 became an incubator for many MIT programs, research, and student activities (here’s a list of all its occupants over the years). 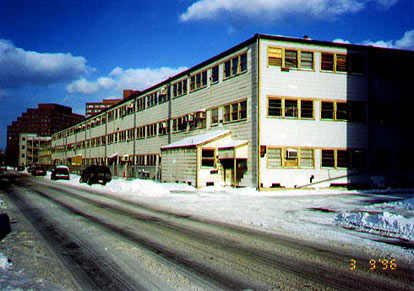 Building 20 wasn’t pretty; it looked more like a barracks than an office. But because it was considered temporary, researchers felt free to modify the space as they needed. Residents didn’t think twice about tearing down a wall or punching a hole in the ceiling. MIT professor Paul Penfield said, “If you wanted to run a wire from one lab to another, you didn’t ask anyone’s permission – you just got out a screwdriver and poked a hole through the wall.”

There’s something to this kind of purposeful chaos. In most physical structures (whether owned or rented), we wouldn’t consider tearing down a wall; rather, employees are expected to adapt to their environment and make do, rather than adapting the environment to their needs. Building 20 may represent an extreme example, but it’s important to give employees some level of control over their surroundings. A study from University of Exeter found that the more control people have over their work spaces, the happier and more motivated they are in their jobs. “They felt physically more comfortable at work, identified more with their employers, and felt more positive about their jobs in general.”

The way an office is structured can significantly impact the flow of information. Do people from different departments mingle with each other in common spaces, or are they isolated in cubicles or separate wings/floors? If employees are siloed, you can bet that ideas and innovation are too.

Johnson talks about the concept of flow to describe the mind when it’s at its most productive. Good ideas don’t usually emerge from a single moment of focus or brainstorm, but are more the product of fluidity (“it is more the feeling of drifting along a stream, being carried in a clear direction, but still tossed in surprising ways by the eddies and whirls of moving water”). Space needs to encourage this liquid flow of information. This could include large collaborative workspaces, as well as common lounges and café areas that encourage interaction and relationships.

When Microsoft researchers were consulted during the design of Microsoft’s Building 99, they requested tons of collaboration space where there could meet and surfaces they could write things on. As Robert Scoble wrote about after his tour of Building 99, “Wide open spaces make the building more social. I talked with several researchers I knew from my time there and they said it has massively changed how enjoyable it is to work. The theory group even gets together for tea at 3 pm every day.”

One response to “Can office design improve innovation?”

Today our portfolio company Coinbase went public via a direct listing. With an initial market cap of over $100b, it is one of the most valuable public listings of all times in the US. It is also the first IPO in the Version One family and hence, a special milestone…